We can routinely determine our location anywhere by use of the GPS sensor carried in our smartphone. However convenient this system is, GPS positioning is highly degraded (or not operative at all) in indoor spaces where we spend a lot of time: large buildings like museums or hospitals, airports, train stations and the like. When it’s desired to determine our position in those GPS-denied environments, we can use Local Positioning Systems (LPS). Unlike the GPS, there does not exist at the present a universally accepted, standard LPS system.

The LOPSI group performs research and technological development in localization systems operative in indoor / GPS-denied environments, and able to offer a typical precision of 1 meter. The main operative platform for indoor positioning is a smartphone. Our strategy is based upon three different components:

Additional information can be used to enhance the position estimation: this includes GPS (if available), environment maps, signals of opportunity (such as light sources, other RF beacons, landmarks), magnetic compass, barometer, etc.

We describe the role of each component next. 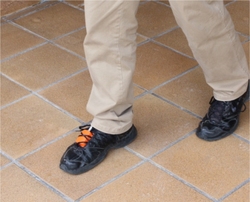 A foot-mounted IMU (Xsens), is used to estimate the displacement of a person

Inertial Navigation methods estimate the trajectory followed by a person from the measurements obtained from an Inertial Measurement Unit (IMU) carried by him, whether foot-mounted or in the hand.

While the estimates obtained in this way are very precise, they suffer from two shortcomings: unknown absolute position and orientation of the trajectory are obtained (only the shape is correctly determined) are measurement drift: the accumulation of errors which increases the positioning error with time.

Due to these problems, inertial navigation must be complemented in order to be effective for indoor location applications.

RF-based localization
Position can be also estimated from the signals received by a person from a set of RF beacons in his/her environment; this would be called an RF-based local positioning system, or RF-LPS. 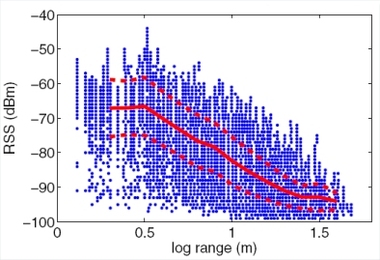 The experimental dependence of the RF signal strength with the distance from beacon to receiver has a large variance (blue points: individual measurements; red lines: mean and standard deviation of the RSS)

RF-LPS might be built from standard wireless communication technology (such as wifi access points or Bluetooth nodes), or by using dedicated beacons (like ultrawideband radio or radio-frequency identification tags), placed in previously known locations. Unlike ultrasound, RF signals propagate through solid obstacles (walls), so a wide area in a building can be covered with a moderate number of radio beacons. The range from emitter to receiver has to be inferred indirectly from the received signal strength (RSS).

In indoor environments, the RF RSS depends not only on the range from emitter to receiver, but is also disturbed by phenomena like multipath propagation, interference, blocking caused by obstacles and people, etc. At the left, we show a curve with experimental data of the variation of RSS signals at 433 MHz with range, obtained in our building. 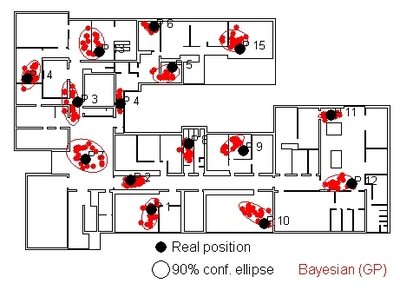 By using Bayesian statistical techniques, we can make the best use of the noisy RSS / range dependence to obtain the best available precision. For example, the figure shows the results obtained with an RFID-based localization system (70 RFID tags distributed in our building floor, of about 1600 square meters). We obtained a localization error under 3 m for 90% of the cases, and the median error was 1.5 m.

This precision can be enough for many cases, but falls short for other applications like guidance of disabled or impaired people, which might require more robust localization.

The optimum approach would then be combining the PDR- and the RF-based approaches to localization, as we will show next.

Estimation of position by Bayesian fusion of both approaches
A Bayesian framework permits to combine the PDR-deduced trajectory (precise, but relative and subject to drift) with RSS-based positioning (noisy, but absolute and without drift), and thus obtain highly precise results, useful for most applications. This estimate can be firther refined by use of a map of the building (if available), magnetic compass information, and other signals of opportunity as can be found in the environment. This is the approach currently followed by the Lopsi group. 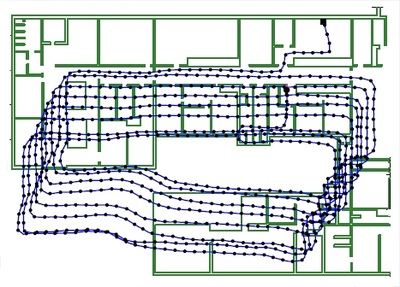 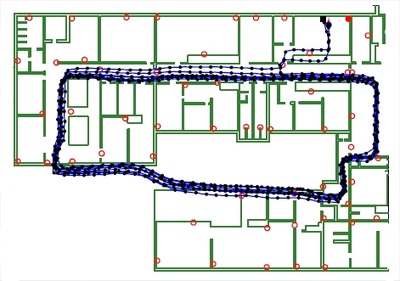 Position estimates with INS methods accumulate errors as the length of the trajectory increases (left), but they can be compensated with the use of an absolute positioning system like a set of RF nodes (red bullets, right)
Last update: January 20th, 2015